“Any man who can drive safely while kissing a pretty girl is simply not giving the kiss the attention it deserves.” ― Albert Einstein

Relating to Einstein’s quote, we decided that we’re not giving enough attention to some of the most important love stories from the wedding photography industry – the stories behind the camera lens. These talented couples brilliantly capture and immortalize emotions, passion and genuine happiness during dates, engagements and weddings. So, let’s turn the spotlight in their direction, and discover the romantic stories behind those legendary cameras. 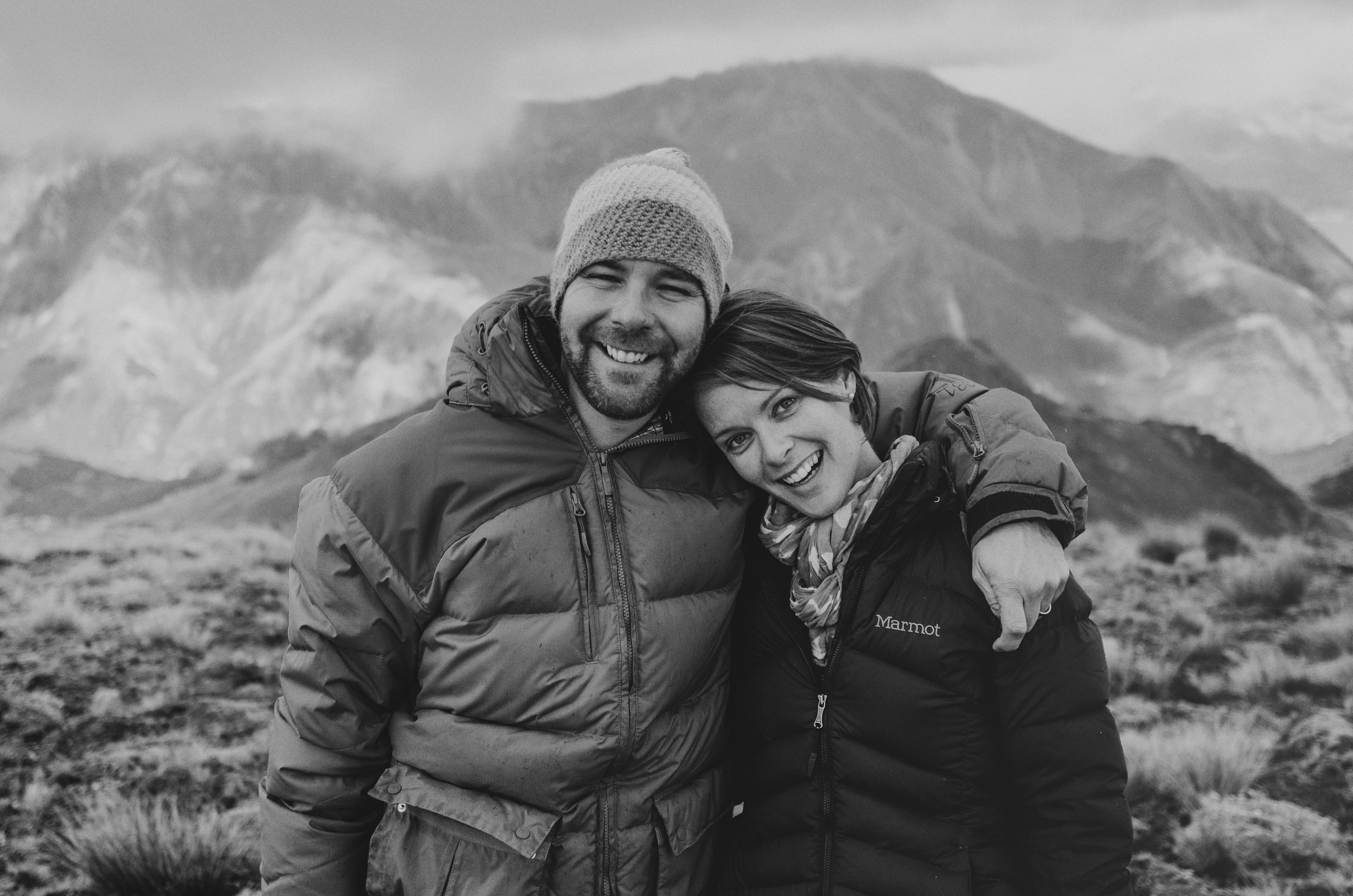 “Blue eyes, blonde braids and a snowboard in hand, I was smitten at first sight.” – Jim

How long have you been in the photography industry?
We’ve been full time 3 years this December, about 2 years building it up to get to that point.
How long have you been together?
We’ve just had our 10 year anniversary, all up it’s been about 14 years together!
Jim, what you love the most about Vicky?
Ack where do I begin? She’s smart, creative, kick ass snowboarder, loves adventure, beautiful, let’s me buy photography toys, let’s me go adventuring by myself, is the Mother of my incredible children (and is the best Mother), great cook…
Vicky, what you love the most about Jim?
Jim is the most loyal guy you will find, he has an amazing passion for life, our family and for our business.He is creative, he always knows the best music to listen to. He works so hard, for this I love him so much as it means I can be at home for the kids! I love that we have different strengths, this makes us an awesome team. He makes the best pizza, is always up for adventures and he makes the best cups of tea…
How did you meet? Describe your first date.
We met in Steamboat Springs, Colorado. We were both Snowboard Instructors at the time, we came over from the NZ winter season (different resorts), had a bunch of mutual friends but had never met before. Due to the recent disaster of 9/11, all of the visas for the USA were delayed. I was the last instructor to get approved and when I finally rocked up, Vicky was the very first instructor I met at the Ski School. Blue eyes, blonde braids and a snowboard in hand, I was smitten at first sight.
Do you have a life motto, a “golden rule” or a favorite quote that you can relate to?
It’s not luck, it’s about making opportunity out of chance. Just knowing that you have the power to make things happen. 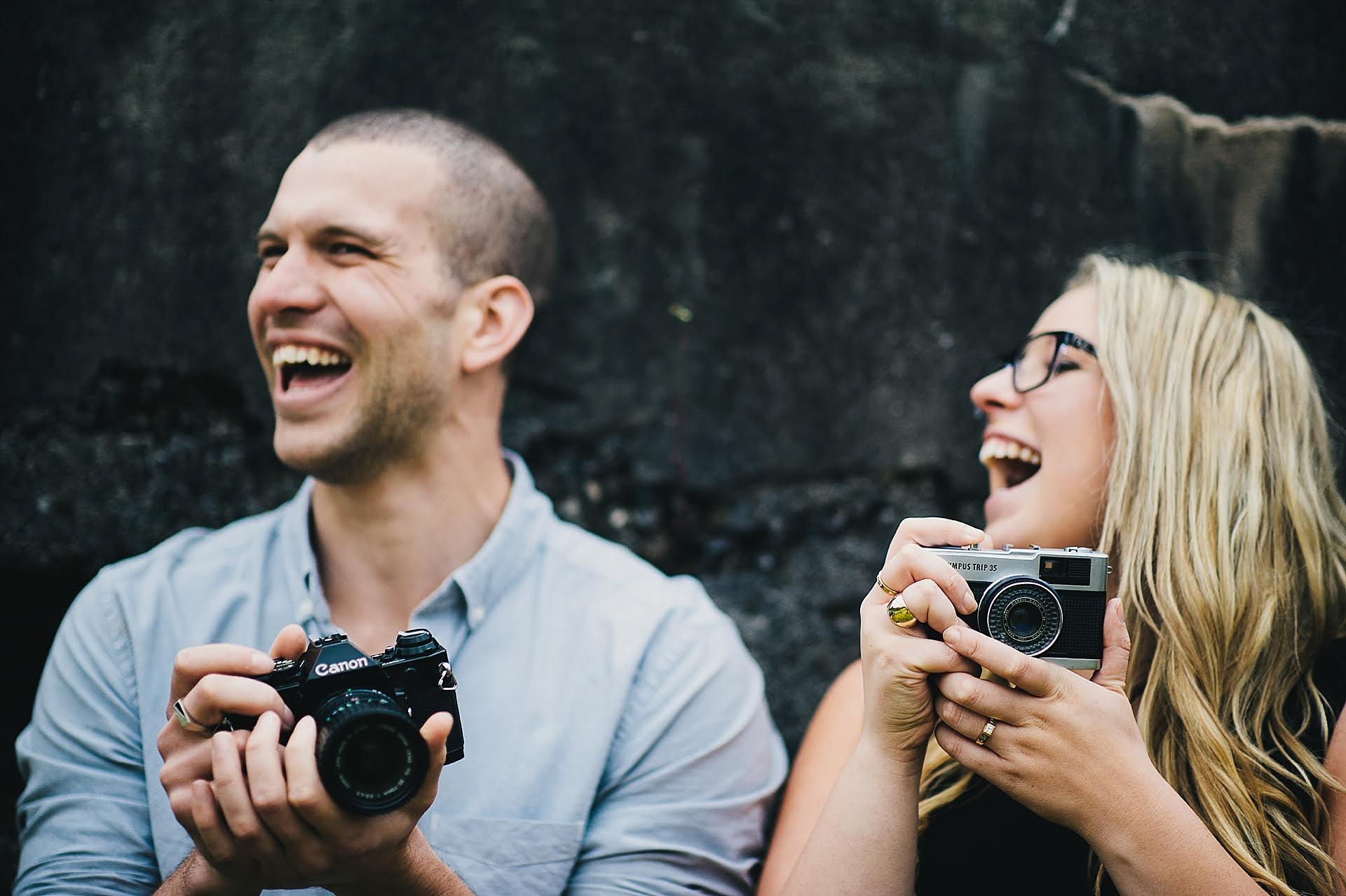 “We just work so well together – it’s nuts!” – Shannon

How long have you been in the photography industry?
The Industry? Hmmm ever since we got a camera, the industry sort of became a part of us! We met in 2011 though – so we started using our cameras in a like minded way at this time.
Our business “The Official Photographers” became a full time job at the beginning of 2015.
How long have you been together?
Nearing 5 years and loving every minute!
Shannon, what you love the most about Aaron?
How caring and thoughtful Aaron is – seriously unfound!
Aaron, what you love the most about Shannon?
Shannon replies “OK – holy s***, I just Asked Aaron and he said the EXACT same thing – Caring and thoughtful. We just work so well together – it’s nuts!”
How did you meet? Describe your first date.
We met taking photos! Sort of. (I) Shannon worked as a nightlife photographer at the time – (taking photos of drunk people in nightclubs haha) there were only a few around at the time, so when I saw a photograph on Facebook of Aaron (also taking photos in a nightclub) I had no idea who he was – so added him! Not many people know that. They think we met literally taking photos.
From there we went on a fair few photo dates, exploring with our cameras, flirting and trying to be cool. Now we are literally inseparable (yeah yuck) and are getting married next year! Woo!
Do you have a life motto, a “golden rule” or a favorite quote that you can relate to?
Shoot for yourself. 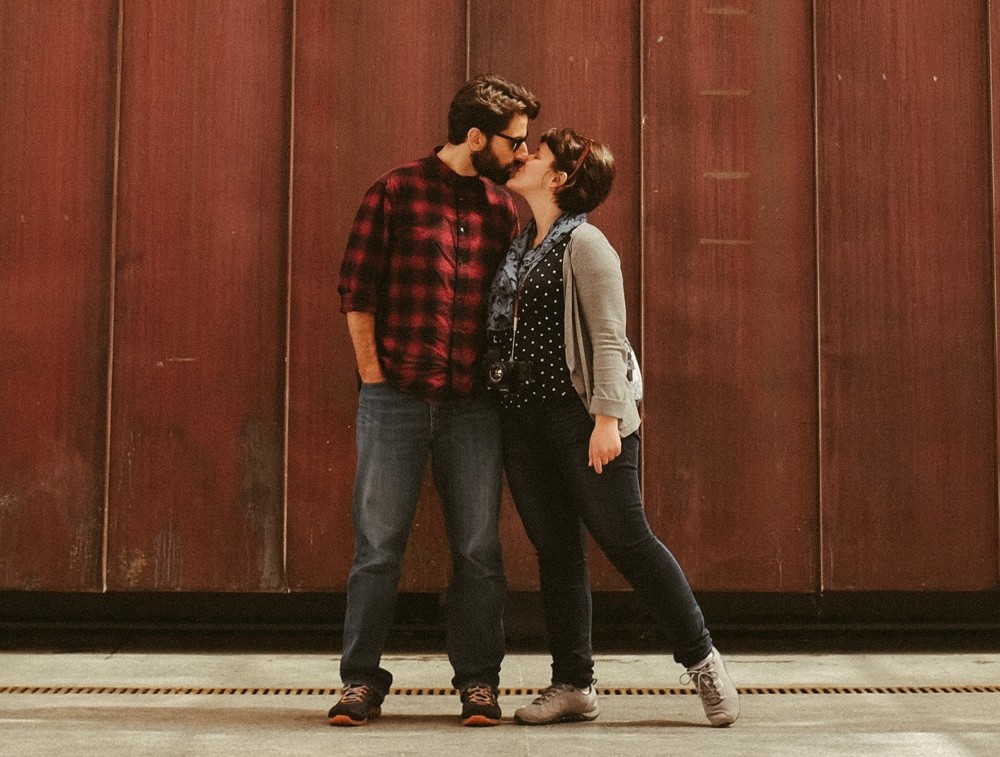 “She’s my rock, my world and my inspiration. Whenever I’m feeling the blues or in a creative funk, she picks me right up. She’s like Joy from Inside Out.” – Pedro

How long have you been in the photography industry and how long have you been together?
We’ve been taking part in all these couples’ lives since 2010 – so it’s gonna be six years any minute, now! Only three years after we met and started dating and one after we got married. Yes, that’s right. We’ve been married for seven years and they’ve been the best years of our lives. We can’t imagine life without each other – both personally and professionally.
Pedro, what you love the most about Marina?
Hmm, what I love most about Marina? That’s a really tough question because she’s basically perfect. She is my absolute better half and I wouldn’t be here today, running a successful business, if it weren’t for her. She’s my rock, my world and my inspiration. Whenever I’m feeling the blues or in a creative funk, she picks me right up. She’s like Joy from Inside Out.
Marina, what you love the most about Pedro?
Pedro is the love of my life and the best listener I’ve ever met. If needed, I would abandon everything to pursue happiness by his side. He is a dreamer who speaks with images and feels strongly about most things in life, he hugs and smiles with all his heart and can’t help but be brutally honest. He keeps me grounded (all this excitement for life needs some wisdom to avoid things getting crazy) and his technical side balances out perfectly my emotional, passionate side.
How did you meet? Describe your first date.
We’re actually from the same town and we went to the same school, so we’ve known each other since we were teens. We went separate ways to university, but life brought us together again in 2006 when Pedro went to Lisbon to work and Marina was there finishing her degree. Madly in love, we moved in together after just a couple of weeks and we’ve been together ever since.
Our first date was very peculiar, to say the least. We haven’t seen each other in years – only talking on Hi5 and Messenger (remember those?!) – and I decided to invite Marina and cook dinner for her as her birthday present. I had no ingredients in the pantry, so we met pretty early in the evening and went shopping for groceries together, like a married couple. How weird was that! (smiles) I had no idea what I was doing, but apparently it worked. And even though the food I cooked that night was pretty bad, she appreciated the effort. Just to be on the safe side, she’s been doing all the cooking ever since.
Do you have a life motto, a “golden rule” or a favorite quote that you can relate to?
Since Pedro left his engineering job to become a photographer, we decided that we would never accept to be unhappy while doing what we love. Every decision we take is based on that motto. 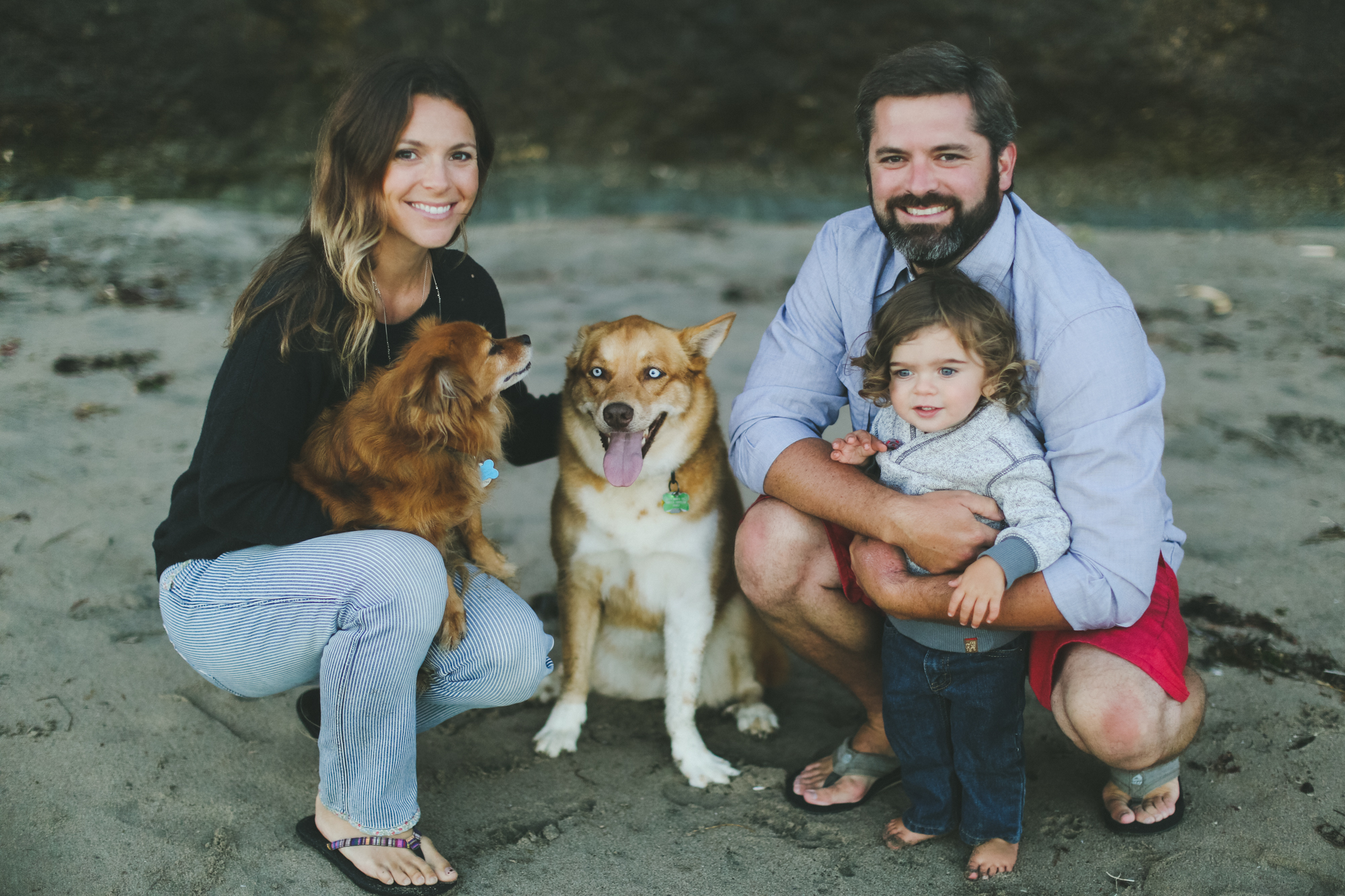 “And not a day goes by that he doesn’t have me laughing.” – Marina

How long have you been in the photography industry?
We’ve officially been in the business since 2013 (just ending our third wedding season). We shot our first wedding for some friends in 2012, but had no idea at the time that it would transpire into a full blown wedding photography business. We loved every bit of it, and in 2013 decided to put ourselves out there and see what happened!
How long have you been together?
Since October of 2007, so 8 years… married for 4 (smiles)
Marina, what you love the most about Matt?
Oh boy, tons of things…but one that’s high on my list is his fierce determination – he is a serious go-getter and works incredibly hard. He’s been self-employed for most of his adult life (owns a construction company which takes up his M-F, shoots weddings on the weekends with me!) and has weathered many challenges that threaten small businesses. When it would’ve been much easier to throw in the towel on his dreams and go work for someone else, he really pushed through and stayed his course. When he wants or believes in something, he absolutely makes it happen and never gives up. I admire that so much. That, and not a day goes by that he doesn’t have me laughing.
Matt, what you love the most about Marina?
Her unbridled aim and determination… she’s like Jekyll and Hyde – she’s a psychotic level workaholic (in the best way possible), but also a sweet, nurturing, loving wife and mother. It’s hard to explain, but it’s really an amazing combination, and I absolutely love that about her.
How did you meet? Describe your first date.
We met at a mutual friend’s birthday party, which happened to be a sunset sailboat ride around the Santa Cruz coastline! Super romantic, eh? Except for Matt brought a date with him, after our birthday girl friend had told me (Marina) all about her friend Matt, and this was allegedly going to be our first introduction. As it turned out, we somehow found ourselves talking to each other for the better half of the sailboat ride, ended up ditching the party once it docked after several drinks, and high-tailed it for the Boardwalk to ride the Giant Dipper Roller Coaster. When we met back up with the party, Matt’s date had met up with some friends so it wasn’t a total and complete disaster… We spent the rest of the night talking, dancing, making-out and ended up at a hole-in-the-wall pizza place, eating slices on the curb at 1:30 AM in Downtown Santa Cruz. It was a good night.
Do you have a life motto, a “golden rule” or a favorite quote that you can relate to?
Marina – I find myself referring to the notion of “pulling yourself up by your bootstraps” quite often – the notion that no one is going to make it happen for yourself but you (whatever IT may be)!
Matt – My “golden rule” is: Opportunity is best when its met with preparation… do your part and prepare for opportunity. When you’ve taken the time to prepare yourself physically, mentally for opportunity, when it strikes, that’s when the pendulum swings your way.

We hope you enjoyed reading this as much as we did.
Since it’s Thanksgiving today, we would like to wish you a wonderful celebration with your family and loved ones and THANK YOU for being part of our Flo Community.